Have I mentioned that I don't PvP? Well, every once in a while I'll hop into a BG for something different. But I have to be in the mood for PvP and it doesn't strike me very often. Because I find it agitating.

Anyone who's ever been in a duel or a BG knows that PvP is a completely different experience to PvE. PvP is faster paced and utterly unpredictable; a lot of people, including the hubby, find it exhilarating. I can appreciate their appreciation of the rush. Tanking is a rush that I came to love - yes, it can be stressful too, but damn it's fun!

PvP is a different sort of rush - one that, for me at least, is full of panic and confusion. I'm not even sure why I find it so nerve-wracking. Give me an NPC baddie to face and it's a challenge. But put me in a BG, or even a duel, and I go into adrenaline overload and all my logical thought processes grind to a stuttering halt. It's rather embarrassing really.

The hubby obtained his Arena Pass as soon as it was announced. And started bugging me to buy one too. While on one hand, I'm grateful and flattered that he wants to play with me, on the other hand, I know damned well that PvP isn't my strongest skill. (And that's putting it mildly.) I told him he'd be better off partnering with someone who's good at, and enjoys, PvP. So we approached one of my officers who regularly runs BGs and asked if he'd be interested. He was and suggested we try out some level 85 Arenas as practice.

I'm still not quite sure how my suggestion that the two of them team up resulted in the three of us queuing for All Arenas last weekend. O.O

Seeing as we were queued I hastily retrieved my crafted Resilience set from the bank and suited up. I frantically dug through my Spellbook for any abilities that sounded PvP-friendly. I rearranged my toolbar. The enter Arena screen popped up. /panic 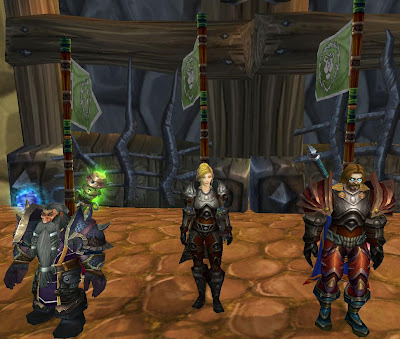 Our first match was laughably short and I'll freely admit that I was the first to die. I did get marginally better with each match (at least I'm assuming I did since it took me longer to die) and E's incredibly patient instructions via chat. Sometimes I'm glad we don't have Vent since I'm quite certain he was probably growling some very unflattering things about my failtastic endeavors at his monitor.

Our last match, the hubby got up from his machine (his desk is behind mine in our study) and stood over me to watch as E and I fought for our lives. (Without the hubby to heal us, it was only a matter of seconds before E and I went down.) Our conversation went something like this:

Hubby: Are you just running around?

Me: No! I'm pushing buttons too! See?? OMGWTFsomebodystunnedmeNoo! Wait, where's my bubble-heal button? No, don't kill me! Ahhh shit.

I had to call a halt. I was breathing hard, sweating and shaking so badly I couldn't keep my fingers hovered over the keys. I swear it took at least ten minutes for my heart rate to return to something resembling normal and for my hands to stop shaking.

I don't think I'm cut out for this Arena stuff.
Posted by ThePinkPally at 9:22 PM